What if it is true! What if the tales written in our holy books are true and based on real history! What if the stories of our grandmother were not just for entertainment but there is truth in it! What if what we know about our history, is not complete! Are we missing something important? If these tales are true then it is crystal clear that we will have to write our history again.

We have seen Photos of the planet plenty of times. I am sure that you also have noticed that planet Mars looks like a war zone. Photos of this planet, direct to its violent past. In this photo, you can clearly see that a huge destruction sign is present on the surface of the planet Mars, which reason could not be explained by our scientists. You can also see that long and huge crack is present on the planet Mars which is much deeper than the grand canyon on earth. This could not be happened by any kind of nuclear weapon. Some scientists believe that this incident was happened by huge electricity discharge. But the question is, where such kind of heavy electricity came from? We all know that Mars is about half of the size of Earth and we have never seen any destruction mark on earth which occurred by sky electricity. 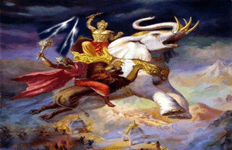 It means, this devastating event happened due to some kind of alien weapon. In India, people worship an ancient god known as “Dev Raj INDRA”. INDRA is the king of gods. He lives in the Heaven. He is the god of “Rain”. It is written in Indian Holy Books that “Indra” has a weapon which is known as “BAJRA”. This weapon is able to discharge huge amounts of electricity. So what if our ancient people were true in their stories that they have seen Evidence of fight on planet Mars? I think, our ancestors were not mad. They have written what they were watching in their time. Those stories are not just fiction but the truth. Scientists are getting agree with this fact that our ancient holy books are the true history of mankind. We should take it seriously.