We all have heard and seen many stories about a heavy flood that suddenly came and destroyed many ancient civilizations in all over the world. This site is another proof of those devastating & destructive phenomena. Many little and big things came out after digging the site that speaks in volume about the prosperity of the ancient civilization which was living here in the past. As you can see in these images, there were many T-shaped pillars found over which mysterious creatures finely engraved. 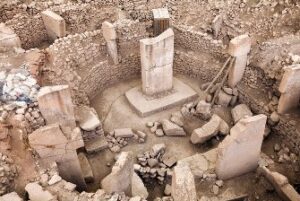 On the first look of this site, it became very clear that the civilizations who were living here were advanced in technologies. They were able to cut & design the big rocks in beautiful formations and lift them from one place to another easily. It is written in our holy books that the ancient humans were in contact with their gods so It might be possible that the gods used to help our ancestors to built such mega structures. It is also very clear that ancient gods/aliens used these sites for their own and after leaving earth, people started to worship such megastructures in a hope that one day, their gods will return as they had promised in the holy books. This ancient site is still under study by archeologists and scientists. They are trying hard to disclose all mysteries and secrets of this ancient site.