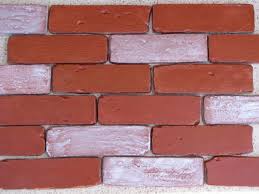 By looking at the exact square shape of these bricks and the art of making these walls, we can imagine that there was an intelligent species living on the planet Mars in the past, which was very similar to us. They were also skilled at how to construct houses! Although, NASA scientists did not say anything about the ancient life on Mars, but by looking at those bricks here in this photo, it must be said that with the help of mangroves and stone pieces of Mars, they had built a much stronger houses there in the comparison to the houses built here on earth. NASA admits or not but they cannot deny this fact that there was life on Mars in the past.

You can compare the bricks built walls which are seen in these pictures of Mars, from the walls of our houses and you will find no difference. Both of them have been made seem to be made in the same way. This fact is very clear that the ancient Martians were equally developed in their past as we are today. Sometimes they had all the arts and technologies that we have today. They were equally skilled in engineering as we are today here on earth. This debris of the houses of ancient Martians (such as bricks and pieces of the walls) is scattered almost everywhere on the planet Mars. These pieces of houses indicate any horrible catastrophe on Mars. Nobody can say for sure that what had happened in the past on the planet Mars that the entire planet became desolate? What kind of catastrophe would have come there that ended the entire life from the planet Mars? Could any living species successfully survived from that destruction? If so, who were those survivors, and where did they go? Did they go to another planet or inside the planet Mars? Why they did not try to establish life on Mars again? Questions still remain……..