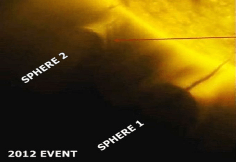 There are many different kinds of metals present on the planets of those star systems which can bear much more temperature than our sun. Those metals are still unknown to us and alien’s ships are made of that & that is why they can stand right before our sun. They are using this pure nuclear energy to travel into the deep universe to reach distant stars. Sun’s surface temperature is lower than of its core, that is why they are harvesting energy from the Sun’s surface and storing it in their “Starships Reservoir” for a long time so they could travel into the vast universe.

NASA scientists have seen some UFOs coming out from the SUN but they are still silent over it. It might be possible that some of them have made their Space Station inside the sun. Our Sun is nothing but a free energy source for those alien civilizations who are Star Travelers. There are many types of alien civilizations living inside the sun. In Indian ancient stories, there is a God whose name is “Surydev” who lives inside the sun and they used to come on earth to educate our ancestors in our past.