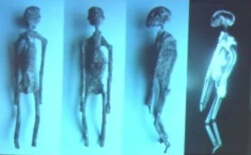 Just like these Nazca lines, Geologists and Archeologists have found some mummies in Peru which are about 6500 years old and were preserved very perfectly. These mummies are much older than the mummies found in Egypt and these are also preserved as well as Egyptian Mummies. One of these mummies looks alive. It looks that he will wake up right now. You can also see in these photos of these mummies that how beautifully they have preserved. These mummies are of a male humanoid and their biological formation is just like humans but something makes them different than humans. They are 5 to 5.5 feet tall in size and they have long hands which could reach their knees. 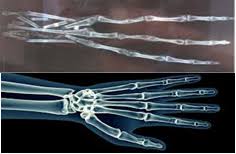 You can also see that they had three fingers in their both hands & legs which differ them from humans. You can also see and compare the scanned images of the alien palm and human palm. Those alien bodies have only three fingers it means they do their regular works like catching and throwing objects and I hope they are comfortable with this body structure. Their mummies were made and preserved very well with hard work which proves that they had ruled over humans in Peru and it might be possible that ancient Peru humans worship them as their king. We have seen many kings mummies in Egypt where were preserved very well also. Some scientists believe that they were not humans.

Extraterrestrial Researchers say that these mummies are half-human and half-alien. Actually, they were children of those aliens or Gods who had come to Peru in the ancient period and made sexual relationships with human females. Their children ruled in Peru that is why their mummies were made gently. Such proof, prove the existence of extraterrestrials here on earth and we cannot neglect them.