Russian Space Agency, 1965. Russian Space Agency had launched a space probe named “ZOND-3” into the space. This space probe was lased with hi-tech camera which can take pictures in high resolution of its time. Scientists had many hopes with this space probe and this probe had done its job very well. ZOND-3 sent thousands of pictures in high resolution of our natural satellite “The Moon”. Several photos are normal but some pictures are mysterious & unbelievable.

Scientists got shocked when they had seen some artificial objects on the Moon in the pictures sent by ZOND-3. In one of the picture, a huge dome shaped structure can be clearly seen. If you will zoom this image, you can see a huge round shaped wall with open roof, is standing on the surface of the Moon. It looks like there was a big glass shape present over this construction in the past. It might be possible that ancient aliens had made this structure where their own environment was present under the glass dome. 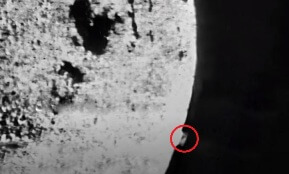 Today, our scientists are thinking to make the same construction on the other planet like “Mars”. Our scientists are thinking to make a huge glass dome structure on the planet Mars, where they can create oxygen-rich environment and survive just like we survive here on Earth. So it is possible that ancient aliens had done the same thing on the Moon in the past. This image proves that we are not alone in this vast and dark universe.