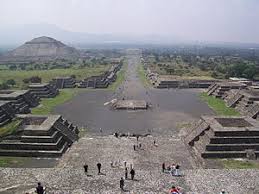 Archaeologists have found some snakes liked Stone Structures with flying wings, near to those Pyramids. But the mysterious thing is that there was no written history of that ancient city. Accordingly, to the local stories, there was an ancient city present in Mexico which was known as “Teotihuacan”. The meaning of “Teotihuacan” is “City of God”. Local people say that their gods were used to live there who had come from Stars. According to local stories, of the ancient period, a huge Knife Shaped Object fell from the sky and 16,000 gods & Goddess were came out from that Object and they had created Human beings there for their help.

I have found in my research that the people who were talking about “Huge Knife Shaped Object” were nothing but a UFO which had come from another star system. That was a huge-shaped flying object which is forcing me to think that a completely alien civilization had left their planet for some unknown reason and wanted to create their new world. They had found the planet earth and created the ancient city. They were very advanced in technology. Strange thing is, the same amount of Mercury was found under the Pyramid in China.

Today we know that “Mercury” is a superconductor of electricity. This large amount of “Mercury” in Teotihuacan, proves that those alien species who were living in this City were much advanced and creating some kind of mysterious energies that used to give power to their Spaceships. I am saying this because when I saw this ancient city’s monuments, it looks like An Ancient Airport Or A “Space Port” of the ancient period. You can also see the huge Stone Structures in the image of that place, which upper area is completely flat good for landing Spaceships, and steps are gently made for those Gods who used to come out from that Spaceships after landing over there.

Today, Tourists who have visited that ancient place, also claim that they have seen some mysterious flying objects over there and snapped some pictures of them too. It may be possible that some alien species are still present there whose spacecraft were caught on camera. This ancient and mysterious city Teotihuacan” was found under dry Mud and there were no written proofs found there because that city was destroyed in a dangerous flood & this is the reason that we have found this ancient city under the Mud. That dangerous flood was clearly mentioned in the many ancient scriptures all over the world. That is why we could not find any written history about this mysterious city. After finding this city, we can say that our ancestors were not making stories on their own for just their entertainment but there is a reality in them. The name of that ancient city was truly correct, “Teotihuacan” means “ The City Of Gods”.